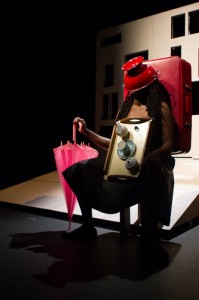 Chanje Kunda did what many people dream of but can’t quite bring themselves to do- she left her office, packed her suitcase and set off for a new life in Amsterdam. She moved from England to the Dutch city with her son after falling in love whilst on holiday in 2012. She has since turned the expereince into a capitvating stage show named after the city. The tale is a story of love, risk and liberation.

Amsterdam has been nominated for Best Studio Production in the Manchester Theatre Awards .

“I think it will sell well to anyone who’s chasing a dream, hankering after freedom, wished they could throw it all in, or fancies a bit of an affair! the themes of her relationship with her son are great- and will connect well with anyone who’s dealing with the realities of parenthood, unfulfilled dreams and fantasies of flying off somewhere.”

‘Amsterdam is so lively and moving that there can be no barriers to audiences having a very good time indeed.’ Dave Cunningham, What’s On Stage. 4 star rating

Written and performed by Chanje Kunda,

The piece contains poetry, drama, live art, choreography and music, creating a visually stunning piece of theatre which explores every emotional and intimate subject matter, set in the beautiful historic city of Amsterdam. Showcased as a scratch performance at Contact in Manchester and Podium Mozaiek Theatre in Amsterdam the Netherlands in 2013. But following intense interest in the piece, and Arts Council of England funding for development, It premieried in 2014 and has toured extensively in 2014/ 2015. At present the show is being performed in autumn 2015 is available for futher touring from Jan 2016 onwards

To book the show email the producer:  michaela.waldram.jones@gmail.com or via the contact details on the Contacts page

More detail on the show’s  content can be found here: https://www.chanjekunda.com/latest-project-amsterdam/